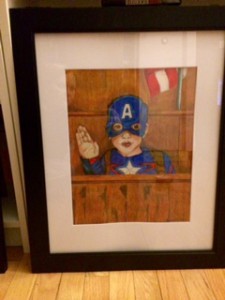 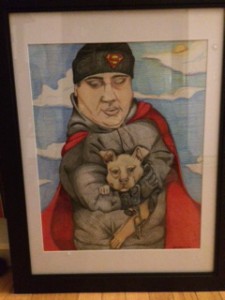 “March of the Unwavering” is an art exhibit created by artists who work in public safety. Police officers, firefighters, corrections officers, paramedics, and even prosecuting attorneys, all contributed their creative talent into making this unique show at the UMASS College of Visual Arts in downtown New Bedford. The show will run from March 1st to March 17th, 2016, with an opening reception on March 10th.  The show will be at the UMASS Dartmouth College of Visual and Performing Arts/Star Store Campus, 715 Purchase Street, New Bedford, MA 02740.

Above are two pieces created by Assistant District Attorney Erin Aiello of the Special Victims Unit. One is called “Seen AND Hard” and it depicts a child taking the oath. The child is in a superhero costume to reflect how brave abused children are to take the stand. The other piece is called “supermanny.” Supermanny depicts NB Animal control officer Manny Maciel rescuing an animal. Manny goes all over the country with the ASPCA. ADA Aiello states that both pieces are meant to reflect her work at the District Attorney’s Office.