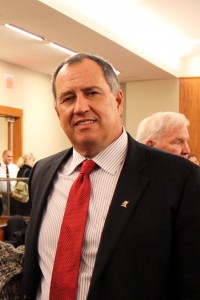 Born in New Bedford, he grew up in Dartmouth and presently lives in Fall River with his wife Sharon and is the father of three adult children. He is a 1978 graduate of Dartmouth High School. He attended the College of the Holy Cross in Worcester, graduating in 1982 with a B.A. in History, and later graduated from Suffolk University Law School in Boston in 1988.

In addition to balancing work and family, Acting District Attorney Quinn is involved in his community, serving on committees and holding various volunteer roles. He has served as both President and Coach at the Fall River’s Youth Basketball League as well as a baseball, soccer, and basketball coach with Fall River Youth Sports. In New Bedford, he serves as a mentor at the Nativity Preparatory School and also serves on their Advisory Board.

Please note that some of our social media links have changed: