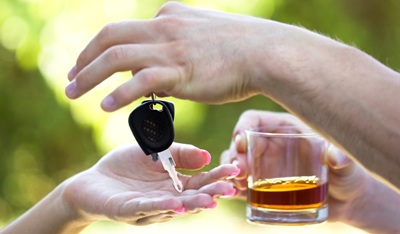 The holiday season is upon us, and that means higher traffic loads, increased chores, parties that involve alcohol, and any other number of factors that contribute to impaired or distracted driving. In response to this, it seems fitting that President Barack Obama has declared December National Impaired Driving Prevention Month. Impaired driving takes on many forms, yet the two most common and most dangerous come from driving under the influence of alcohol and driving distracted while texting. Both of these are issues of concern year-round, however December serves as a reminder to us all. This season, know the facts, play a role, and promote safety while on the road.

Every day, almost 30 people in the United States die in motor vehicle crashes that involve an alcohol-impaired driver. This amounts to one death every 51 minutes. The annual cost of alcohol-related crashes totals more than $59 billion. 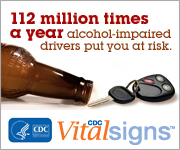 112 million times a year, alcohol-impaired drivers put you at risk.

85% of drinking and driving episodes were reported by binge drinkers.

Drugs other than alcohol (e.g., marijuana and cocaine) are involved in about 18% of motor vehicle driver deaths. These other drugs are often used in combination with alcohol.

The more alcohol you consume, the more impaired you become. Learn in detail how your blood alcohol concentration (BAC) affects your ability to drive here.

1 in 10 teens in high school drinks and drives.

Young drivers (ages 16-20) are 17 times more likely to die in a crash when they have a blood alcohol concentration of .08% than when they have not been drinking. 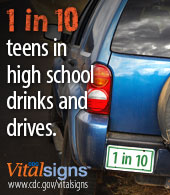 85% of teens in high school who report drinking and driving in the past month also say they binge drank. In the survey, binge drinking was defined as having 5 or more alcoholic drinks within a couple of hours.

1 in 5 teen drivers involved in fatal crashes had some alcohol in their system in 2010. Most of these drivers (81%) had BACs* higher than the legal limit for adults.

Research has shown that factors that help to keep teens safe include parental involvement, minimum legal drinking age and zero tolerance laws, and graduated driver licensing systems. These proven steps can protect the lives of more young drivers and everyone who shares the road with them.

Text messaging creates a crash risk 23 times worse than driving while not distracted.

40% of all American teens say they have been in a car when the driver used a cell phone in a way that put people in danger.

11% of drivers aged 18 to 20 who were involved in an automobile accident and survived admitted they were sending or receiving texts when they crashed.

For more tips on your role and how you can prevent distracted driving, visit the FCC website here.

What you can do: