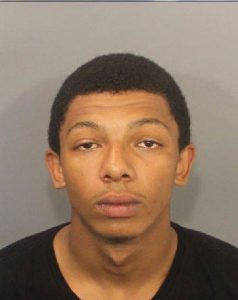 An arrest warrant charging a second individual with the Monday night murder of 29-year-old Jerrod Cohen has been issued.

The warrant, which was filed this evening, charges Jayden Smith, 15, of Fall River, with murder.

District Attorney Thomas M. Quinn III and Fall River Police Chief Daniel Racine are asking the public for any information regarding Mr. Smith’s whereabouts. Citizens are asked not to approach the defendant on their own and are urged to contact police with any information about him. Anyone with information about the defendant is asked to call the Fall River Police Department’s Major Crimes Division at 508-324-2796 or by utilizing the department’s anonymous tip lines at 508-672-TIPS(8477).

A photo of the defendant is attached to this email, and will also be viewable on Twitter at @bristolda.

Police arrested Joel Lopez, 16, of Fall River on Tuesday. He is charged with murder and was ordered held without bail during his arraignment Wednesday in Fall River District Court. He was arrested Tuesday afternoon inside an apartment on Pleasant Street in Fall River.

At around 9:27 p.m., police responded to 911 calls regarding shots fired in the area of 129 Plain Street. When first responders arrived at the scene, they found a male victim in the landing of the first floor of the apartment complex at 129 Plain Street.

The victim, who was later identified as Jerrod Cohen, 29, of 129 Plain Street, was rushed to Rhode Island Hospital where he was pronounced dead late Monday night.

The investigation is being coordinated by Assistant District Attorneys Katie Rayburn and Brian Griffin, and is being conducted by Fall River Police detectives and state troopers assigned to the district attorney’s office.