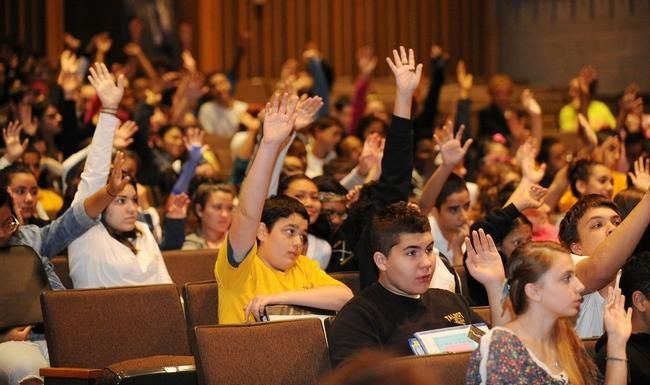 From The Herald News

FALL RIVER — Christian Berrios sat in the front of the class when he was a young elementary school student.

But as he got older, because of peers teasing him for being a “teacher’s pet,” Berrios began sitting toward the back of the class. By the 11th grade, he had dropped out of school. A few years later, he was arrested and served time in jail for selling drugs.

“You cannot live in a house of cards,” Berrios, 26, told an assembly of eighth-graders Tuesday at Talbot Middle School. Berrios, who went back to school for his GED and now mentors youth, was one of several speakers who encouraged Talbot students to pursue their dreams and not let anyone stop them.

“Dream big. And, I say, dare to dream,” Carmen Ortiz, the U.S. attorney for the District of Massachusetts, told the group of about 250 students who attended the Your Future, Your Decision program in the school auditorium.
The U.S. Attorney’s Office, the Bristol County District Attorney’s Office and the Fall River Public Schools conducted the program, which is geared toward crime prevention by emphasizing to students that choices such as staying in school and studying will help them achieve their life goals, while falling in with a bad crowd and getting involved with gangs and criminal, anti-social behavior leads to devastated lives.

“They got on a path, they couldn’t get off it, and now they’re going to jail for 10 to 15 years,” said Assistant U.S. Attorney Peter Levitt, a federal prosecutor in Ortiz’s office.

Bristol County District Attorney Samuel Sutter pointed to Ortiz — who grew up in New York City’s Spanish Harlem — as an example of someone from humble origins who worked hard and achieved great accomplishments. Ortiz was appointed to her post by President Barack Obama.

“Don’t let anyone deter you from your dream,” Sutter said.

Mayor Will Flanagan addressed the students after Sutter and said that he had made a “lot of good choices” that helped him get to where he is today, though he added that he had also made bad choices “because I’m human.”

Alven Dit, 13, an eighth-grade Talbot student, said the speakers inspired him since he could relate to what they were saying. Alven, adding that he is in foster care, said he has already overcome significant adversity but vowed that it would not stop him from chasing his dream of becoming a professional football player or a doctor.

“When I grow up, I’m not going to let anything get in my way,” Alven said.